Alibaba Group Holding, one of the biggest investors in Indian startups such as Paytm and Zomato, is temporarily halting fresh investments in the country as the Chinese e-commerce giant reviews its India strategy, four people aware of the development said.

Alibaba’s four-member investment team in India led by Raghav Bahl, who was appointed last August from Bessemer Venture Partners, has been mandated to currently manage only the existing portfolio, said the people cited above, requesting anonymity.

“They are no longer scouting for deals actively as they were before,” said the first of the four people cited above.

Alibaba has still to exit any of its investments in India, unlike other late-stage investors such as SoftBank, Tiger Global, Naspers and Tencent, which, after raking in billions of dollars from the $16 billion acquisition of Flipkart by Walmart last year, have become very active in the domestic market once again.

Alibaba has, however, faced disappointments at some of its biggest bets in India such as Snapdeal and Paytm Mall, which have far lagged behind the fast-growing e-commerce market dominated by Flipkart and Amazon.com.

“They are not seeing the kind of opportunities in India within Alibaba’s ecosystem that will really compel them to invest. So, while they also have to work to get some exits, they would rather wait it out and not invest, rather than make risky investments,” said the second person, a senior investment banker who has worked on past deals with Alibaba. 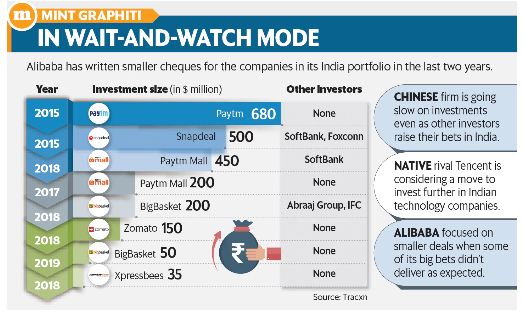 “We remain committed to our existing presence in the India market. As a company policy, we do not comment on market speculation,” said an Alibaba spokesperson in an emailed response to queries.

Mint reported on May 6 that Alibaba is likely to focus more on smaller early-stage deals in India.

Two of Alibaba’s top portfolio companies, Zomato and Paytm, are in the market to raise fresh capital. Zomato, which is looking to raise $500 million, agreed to become an Alibaba Ecosystem company during its last fundraise when it raised $210 million in a round led by Alibaba. The agreement, as reported by The Economic Times, prohibits Zomato from entering any business segments that may hamper the interests of Paytm.

Meanwhile, Alibaba’s native rival Tencent, whose Indian portfolio includes some of the biggest startups such as Swiggy, Byju’s and Ola, is looking to increase its bets on Indian technology companies at a time when its home market is seeing a slowdown in venture capital investments, Mint reported on 25 July.

The Times of India reported on August 19 that Amazon is planning to enter food delivery through its Prime Now service and has held talks with Ola’s Foodpanda and UberEats for a partnership.