2021: What was hot among startups, and what was not-so-much?

Social platforms, food tech and K-12 edtech drew the most investor money this year, according to Tracxn's annual report.

The number of first-time investors in start-ups has gone up impressively over the last one year. (Representational image)

Social platforms have seen a massive surge in investor interest in 2021. They saw a whopping 1,259% increase in funding over the previous year's, and became the hottest sector this year in terms of dollars raised, according to Tracxn's annual report.

They raised $1.4 billion this year.

In getting maximum funds, food tech came second with $1.3 billion and K-12 edtech, third, with $1.1 billion.

Social commerce came last in this of 15 startup business models, and raised $0.5 billion. But, the value of funds into the category shot up by 8,725% over last year. Among investors, Sequoia Capital was the most active, and it was more partial to Series C+ rounds. Also among the top five, Titan Capital and Blume Ventures seem to have placed more faith in entering early in the game, investing more in seed rounds. 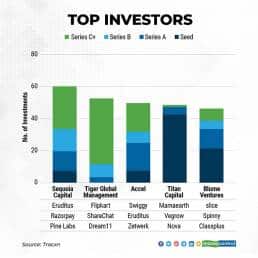 Nearly all the top PE players seem to have gravitated to Series C+ rounds. Only the most active among the five, Temasek seems to have ventured into seed rounds. Fintech and solutions for SMBs seem to have blinked more on accelerators' radar. Consumer companies seem to have caught corporates' interest, more than B2B ones. 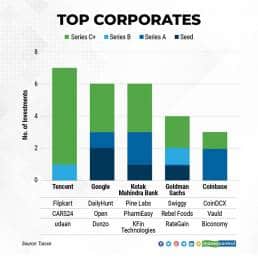 The report records an impressive increase in first-time investors this year. The number went up to 1,145 from the 708 last year. Over the last ten years, the number has grown nearly 18x.
Moneycontrol News
Tags: #accelerators #funding rounds #Investors #PES #seed round #Series C round #startups #Tracxn
first published: Dec 31, 2021 03:57 pm