< Back to Home
LenovoSmarter technology for all

With a sizeable presence both in India and globally, an expanding portfolio of smart devices and a growing stack of smart infrastructure, Lenovo has crafted a new vision for itself. The company looks forward to playing a much larger role in the technology ecosystem with smart solutions that solve problems, create opportunities and transform the way we live, learn, work and heal. 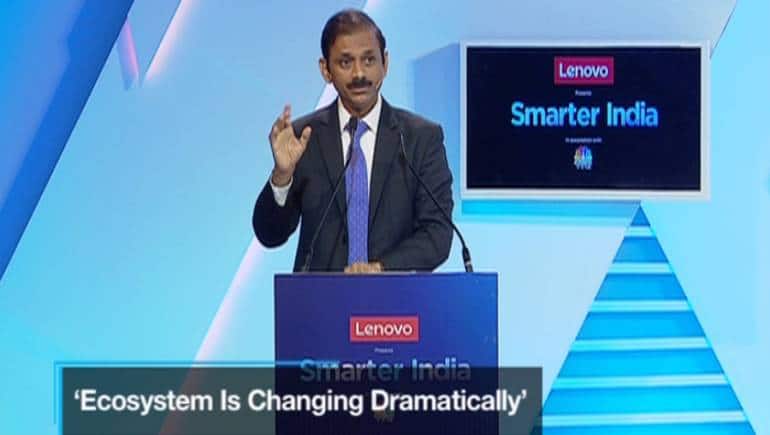 Lenovo India, in collaboration with CNBC TV18, kicked off its ‘Smarter India’ mission with an event in Delhi that explored how technology is reshaping the education system and helping to make India ‘Smarter’. Next, the campaign moved to Mumbai, to unravel how technology is disrupting the financial sector in India.

During an extremely insightful evening, a gathering of luminaries from the BFSI space shared their perspectives on the adoption of advanced technologies, such as AI, machine learning, blockchain and robotics, amongst a host of other fintech propositions, and how these would become the next big drivers in the financial sector.

A vanguard of the financial sector, V Vaidyanathan, MD and CEO, IDFC First Bank, flagged off the evening by delivering a key note address on the theme ‘Smart Technologies and Ecosystems in Banking and its Evolving Implications’. He began by defining the term smart ecosystem to mean the culmination of various digitally-enabled forces, including the fast growing use of mobile phones, a wide net of authentication of individuals through Aadhaar, deep banking penetration, the cumulation of data, the power of analytics, omnipresence of social media, emergence of credit bureaus and, finally, a new generation of people who are born into the digital age and are comfortable transacting and communicating online.

Explaining the implication of this smart ecosystem he said, “It has impacted the speed at which we can cover the deficits in infrastructure, be it the lack of ATM density or branches in the hinterlands. The new digital ecosystem is enabling the presence of a BC network, which compensates for those shortfalls.” He went on to share many more examples of the rapid development of digital infrastructure that emerged due to the smart ecosystem and how it has enabled BFSI players to reach entities or outlets which it could not in the past, in an affordable manner.

His enthusiastic address was followed by an equally powerful presentation by VS Parthasarthy, Group CFO and Group CIO, Mahindra & Mahindra, on ‘Controlling your Digital Destiny’.  He showcased, very practically, how robots can capture information through algorithms and go beyond predictive analytics to offer prescriptive analytics. “This is what the future will look like,” he said.

In terms of the larger picture, he explained that the new normal for companies would be driven by innovative adaptability, climate change and experiential commerce. Further, collaboration rather than competition with start-ups would be the way forward. He also explained why the corporate motto of ‘Built to Last’ would have to be replaced by ‘Built to Change/Adapt’. Finally, he left the audience with an interesting takeaway, “It’s not enough to Control your digital Destiny; you’ve got to Design it.”

Lata Venkatesh, Executive Editor, CNBC TV18, the moderator of the deliberations, set the tone by stating that the finance sector had clearly adopted and benefited from technology faster than any other segment of the economy. The discussion that followed revolved around how banks and other financial institutions, like stock exchanges, are managing within the ubiquitous digital disruption.

Issues deliberated included whether technology was able to control risk better, in the light of banking sector crises and the role, growth and direction of ‘regtech’, especially in the banking sector; whether greater and more frequent use of tech would be able to prevent bad decisions; the impact of data explosion on investments in hardware in the financial sector; how banks could catering to customers along the tech-savvy spectrum, from digital natives to those who are more comfortable in a completely offline environment; the challenges of imagining the future of technology and what would be the next set of constraints; understanding customers through AI and machine learning and the ability of such technology to reach more customers; processes and decisions that are best done by machines as human intervention would actually slow them down and where human interface is still relevant; the fine line between data drawing and privacy; the burden of legacy processes and the use of machine learning for real-time surveillance of the stock market, amongst many others.

The evening concluded with a special address from Rahul Agarwal, CEO & MD, Lenovo India. He reiterated Lenovo’s vision to provide smarter technology for businesses, both large and small, and all of humanity, stating, “We are on a path where given our scale and understanding of the digital ecosystem, we believe Lenovo will play a significant role in contributing to a Smarter India in the coming years.”