In an initiative in Assam, agricultural scientists are helping farmers in the state to conserve and increase the number of barn owls with the help of artificial nest boxes.

On a cold winter morning in late 2009, Dilip Konwar, a sprightly man in his late forties, scrambled up a bamboo ladder and peeked into the dark insides under the roof of his shop, to investigate the mysterious sounds coming from there. As his eyes adjusted to the darkness, Konwar saw a group of barn owl chicks, huddled together. Scattered around were severed heads of rats, snakes, and garden lizards.

Konwar lives in Gohaingaon, a village in Kadam tehsil of Assam’s Lakhimpur district. In this part of India, barn owls (Tyto alba), locally known as lokkhi phesa, are considered auspicious. The lokkhi phesa, named after Lakshmi, the Hindu goddess of wealth and good fortune, represents the vehicle of the goddess and is considered to be a bird of wisdom.

Attached to the back of Konwar’s grocery shop is his rice mill, which stands next to a paddy field and a small bamboo grove. During this time, there was a heavy infestation of rats in the area, an occurrence that Konwar attributed to his mill. But as time passed, Konwar noticed a significant decrease in the rat population. “It seemed to me that the owls were preying on rats from all over this area to feed their young. It saved my grains,” said Konwar.

Barn owls are prolific hunters. They are known as “farmers’ friends” as they feed on over 20 small mammal species worldwide including rodents, acting as natural pest control. Konwar saw it as an advantage and decided to move the family of owls from under the roof to inside the mill. Eventually, the owls became accustomed to having humans around and became friendly with Konwar’s family and neighbours. Dilip Konwar at the entrance of his rice mill in Lakhimpur, Assam. The barn owl family in the roof kept the rat population of rats in the mill in check. Photos by Prabal Saikia, RARS.

When Prabal Saikia, an ornithologist and chief scientist of RARS, learned about Konwar’s owls, he began to design nest boxes, to conduct an experiment. Saikia designed a prototype with soft plywood. It had a removable lid and holes on two sides for ventilation; an entrance hole measuring six inches in diameter, and a platform in front for young owls to exercise their wings before their first flight.

In September of 2012, two artificial nest boxes were placed at a height of 10 feet from the ground inside the mill; one of the boxes got its occupants by October: a pair of barn owls.

“In Assam, we advise farmers to install these nest boxes in October, before the Durga Puja festival, because the breeding season starts from November. The breeding cycle is completed within four months: October to January,” said Saikia.

When Saikia studied the regurgitated pellets of the owls, collected from Konwar’s mill and nearby areas, he found that more than 90% of their diet comprised rodent species – bandicoot rats, house rats, field rats, and grey musk shrews. Barn owls throw up undigested parts of their food after their digestive system has finished extracting the required nutrition. These lumps of vomit, known as pellets, which often contain bones, feathers, tails, fur, teeth, and indigestible parts of their prey, are studied by researchers to determine the birds’ diet. The nest boxes in Konwar’s mill saw 100% success in egg hatching, breeding, and fledging. 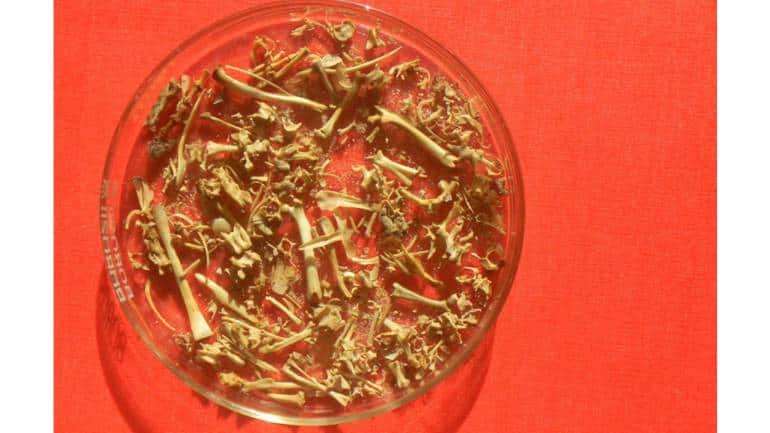 Bones and skulls of rodents found in the nests of barn owls nesting at Dilip Konwar’s rice mill in Lakhimpur, Assam. Photo by Prabal Saikia, RARS.

Since then, the owls have been coming back every year around October.

As part of the experiment, in 2014, Lakhi Prasad Hazarika, currently the principal of a college in Darrang district, set up a nest box in the Bowalguri area of North Lakhimpur town, behind North Lakhimpur College where he was previously working as an associate professor of Zoology.

“There was a pair of barn owls and their five owlets. I had counted over 1,270-odd skulls of rats in that area. Rats cause substantial losses to farmers during harvest season. So if one pair of owls kills over 1,200 rats in one area over a short period, it is an indication that the rat population is in control,” Hazarika said.

After the success of the first experiment, RARS created more nest boxes and distributed them amongst farmers across Lakhimpur, Dhemaji, and Jorhat districts between 2013 and 2015.

Of the 15 nest boxes installed in various sites, seven were used by barn owls for roosting and nesting. This occupancy rate proved that there were not only insufficient natural nesting sites available but also that nest boxes could be used to increase the barn owl population in agricultural areas. A nest box for barn owls being set up at the Regional Agricultural Research Station (RARS) of Assam Agricultural University(AAU) in North Lakhimpur, Assam. Photo by Prabal Saikia, RARS.

Need for data on owl's

However, there is a lack of official data on barn owl distribution and population. Experts attribute it to the elusive nature of the owl, and a lack of government initiative to collect and record substantial data.

“There is hardly any data available to ascertain the exact population number. We only come to know about the presence of barn owls in particular areas when we receive reports of rescue, or when we see the checklists of various Reserved Forests and other protected areas,” said Jaydev Mandal, co-founder of Assam Bird Monitoring Network, and an assistant professor of Zoology at Madhab Choudhury College, Barpeta.

According to Saikia, the indiscriminate felling of trees in and around paddy fields has led to the loss of natural breeding ground of barn owls. “Barn owls are cavity nesters. In the earlier days, Assam’s paddy fields were dotted with many trees, like the elephant fruit tree, where owls used to nest. There is a steady decline in the number of trees,” said Saikia.

In 2021, Saikia’s nest box prototype got a nod from the government for sale, after several years of experimentation across Assam. The boxes will now be sold to farmers at Rs. 850. The idea is to conserve and increase the barn owl numbers which in turn helps keep the rodent population in control. With this, the farmers will be able to reduce dependence on chemicals and organic farming can be encouraged. 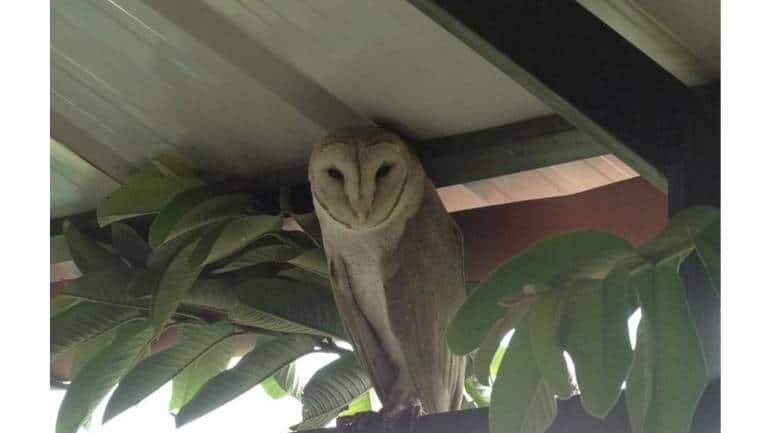 A barn owl in Thrissur, Kerala. The species is widespread in India but there is a lack of official data on barn owl distribution and population. Photo by Satheesan.vn/Wikimedia Commons.

“Installing artificial nest boxes definitely helps in increasing barn owl population in localities where there is a paucity of nest sites for owls to breed and multiply,” said Periyasamy Neelanarayanan, an associate professor of Zoology in Nehru Memorial College in Tamil Nadu’s Tiruchirappalli district.

Neelanarayanan, one of the first researchers in India to have studied barn owls during his Ph.D. from 1992 to 1996, notes that an increase in barn owl numbers puts pressure on rodent populations that are present in the crop ecosystem.

“But there is a fluctuation. If the predator population increases, the prey population will automatically decrease. Once prey population dwindles, because of the paucity of food, predators will starve and their population will also show a decline. It is a cyclic process. There is no long-term study to show how long it takes to stabilise the owl population. In India, we have only two-year data. We need around 20 years of data to tell when the fluctuation starts and where it ends,” Neelanarayanan said.

He echoes Jaydev Mandal and other experts on the lack of data on owl distribution and population in India, observing that India is home to 33 species of owls; most of the owl concentration is in the northeast of India but there are no studies about the different owl species, except for barn owl and spotted owlets.

Neelanarayanan’s Ph.D. research, Ecology of Barn owl, Tyto alba and its predatory pressure on the rodent pests of agricultural importance, was conducted under the Indian Council of Agricultural Research. “There were no studies on barn owls available until the 1990s. Our findings helped spread awareness about the usefulness of this bird. Farmers started thinking of barn owls as friends,” he said.

The use of rodenticides is problematic in rice fields, especially in Assam, which depends on rain-based agriculture. It often results in the killing of not only pests and rodents, but also helpful organisms, flora, and fauna present in the agricultural ecosystem. Rodenticides are also expensive and toxic, making them harmful and uneconomical.

“Natural insect, pest, and rodent control is crucial in the current times because the market value of organic products has increased exponentially,” said Saikia.

Saikia says, even though natural rodent control agents are mostly raptors, almost 90% of rodent control is done by barn owls. However, he thinks that farmers cannot depend only on barn owls for the thorough removal of rodents. He suggests using barn owls as part of an ‘integrated management system’ wherein farmers combine the use of barn owls, along with repellents and botanicals, which do not kill, but repel rodents. It is a laborious task to control rodents in agricultural fields, especially in water logging conditions, common in Assam. In such a situation, birds are the best means of eco-friendly, rodent management.

In November, the breeding season of the barn owl coincides with that of field rats in Assam. This is also the time when rice fields are ripe with grains. As the rat feeds on the grains, the stealthy barn owl swoops in, and snatches the unassuming rodent in its talons, scoring a meal for the newborns. According to researchers at RARS, an entire family of barn owls – an adult male and female and two or three owlets – eats about five or six rats a day.

“It’s a wonderful cycle. That is why the barn owl is called the natural enemy of rodents. And this is why these owls are the best friends of farmers,” said Saikia. RARS is also researching indigenous traps made of bamboo, which are used traditionally by different tribes in northeast India, to be used as rodent traps.

“We have collected 25 of these from various tribes across the northeast and we are trying to gauge their efficiency,” said Saikia. “We are hoping that it will promote organic agriculture in Assam.”