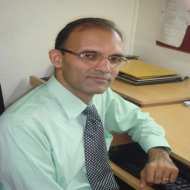 Rajaram had been very tired that Saturday. He had brought some work to do but did not have the energy to even touch it.  He had just dozed off, with his laptop lying on bed and all his papers strewn about.

Aditi, his wife, had been urging him to look at their finances. She was the one handling the family finances. But, she was feeling overwhelmed. Rajaram was to assist her, but he had been keeping long hours and showed little interest.  Aditi wanted to take professional help.  Rajaram was not convinced. Aditi had enlisted the support of Srinivas, their friend. That is how I came into the picture.

I was able to make out the desperate need for professional help, in their case. I had spent about an hour taking them through the process of financial planning and how it could bring clarity & peace of mind for them. The more Aditi heard about it, the more convinced she was.  Rajaram however, hemmed and hawed.  He was plainly bored.

I was surprised to get a call from him today, early in the morning. He wanted to meet me first thing in my office. “Would it be possible?”, he had inquired earnestly. I had agreed. When he came to my office, he had a determined look on his face. He wanted to sign up for a Comprehensive Financial Plan, right away.  This has happened with clients before. But still, I was surprised and wanted to know about his change of heart.

Rajaram looked at me piteously. Aditi however seemed to be enjoying it. “ You know something… I got a divine visitation today morning. I desperately need to  straighten out my finances”, he said with a zapped look on his face. He had a swig of water and continued. “I don’t know how you will take it. But I had seen God, face-to-face this morning and he exhorted me to straighten out my finances”. He looked at me. I had an earnest face and simply asked him lay it down straight for me.

He dived right in. He started narrating… I was in some forest and was walking down a path in the moonlight. Why was I here and what was I doing? I did not know. Not knowing that added to my already rising panic. It was as if someone was urging me on. I came to a clearing, which was actually the edge of the hill, I was standing on. The air was filled with a sweet aroma and a heavenly calm descended on me. I saw the silhouette of a figure at the other end. It was beckoning to me. I walked down and immediately knew that this was not just another man like me. The bliss I felt was indescribable. I knew this was my Lord Krishna. He was somewhat different from what I had imagined – but was magnetic in his appeal and supremely calming in influence.

The Lord enquired about me and the family. I was overwhelmed. He started advising me about life itself. At one point, it turned towards my finances. He was admonishing me for neglecting my finances.  “Do you know how worried Aditi is?”, he had remarked. “If you can’t devote time, why don’t you hire a professional to help you ”, he had said. I had resolved then and there to contact you. The Lord had added,”In one of my forms as Balaji, even I had to take a loan from Kubera to marry Padmavati!  Managing money is important.  I could have created gold and money. Your governments are doing it all the time – printing notes. But I wanted to show the world that even the Lord has to be disciplined with money.”

Next he was talking about my work, my responsibilities & duties… finally, he wanted me to go back home and act on all that he had enjoined me to do.  I prostrated before him. He gave me a flower and gave me my car key! Again I bent down to touch his feet and lo, he was not there.

He had told me that I would find the car by the road. I did find the car and drove down home. This place was just a couple of kilometers from my place. I did not even know that such a serene place existed.  Aditi was expecting me, which was a surprise. She had a dream and a visitation by the Lord himself, about how he has counseled me.  I had shared everything that happened with her. Aditi was pleased.

Here I am with you as per the Lord’s counsel. I did not want to waste any further time.

Seeing him in the right frame of mind, I quickly told him about financial planning… I told him that it was a blueprint for one to follow and achieve the goals one has in life.  A financial plan examines where one is, where one wants to go and how to get there.   A plan will also be able to clarify if the goals can be achieved or not, given the cash-flows and if so, what needs to be done.

I had to tell him too that this is not some investment advice that we are offering; but is far more overarching in scope.

I then told him of the very significant benefits of financial planning   1) a clear structure & path to walk down to achieve goals  2) specific actions to be taken for the purpose of straightening out the finances and moving towards the goals 3) discipline in money matters and regular investments 4) sorting out of one’s past investments & insurances, optimized investment portfolio with periodic reviews 5)  good risk management and security for the family 6) providing adequate liquidity, provisions & contingency funds, managing available finances well by fine-tuning the products to be invested in according to tenure, risk & return.

Since it is a holistic exercise, it will offer tailor-made solutions for the family, to meet it’s specific objectives.

A financial plan will bring clarity and peace of mind. We will always be available for consultations on anything to do with your finances, I had told him.  The plan will also be revised every year to take into account all changes that have taken place in the intervening 12 months…

Rajaram seemed pleased – with himself. He seemed to know that this is going to work for him. He said,” I am fortunate to have a wife like Aditi. She is intelligent, disciplined and responsible. She will take this forward from now on”.  Aditi did not have a problem with this palm off. Only, I had to say that I would like to meet them both when the plan progresses. Rajaram was fine with that.

While leaving office, he was elated. He started humming a gay tune. He was himself again and Aditi was happy that finally, things have started moving in the right direction – God Speed.