SME Stepup
Article: Bio-informatics becomes a drug for this banker

Bio-informatics becomes a drug for this banker 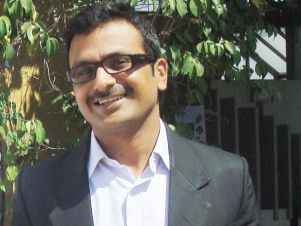 It's an unlikely switch – from investment banking to founding a life sciences informatics start-up – but Jignesh Bhate sensed he was on the verge of something really big. His business acumen, versatility and vast knowledge told him that the future was beckoning.

Thus, after six years as an investment banker, Bhate, called it quits and at the age of 30 launched Molecular Connections in 2001. The company, which works in the areas of drug discovery, chemo-informatics services, patent mining, intellectual property and scientific technical medical (STM) publishing, provides these services to pharmaceutical companies, scientists and engineers.

Stripped of jargon, Bhate's company essentially uses technological solutions to assemble and organise all the relevant data required to help drug discovery for pharma companies aiming to cure various medical conditions. Among other services, Molecular Connections achieves this by providing them 'drug targets', protein molecules in the human body whose behaviour can be modified by drugs.

"In an age where information is abundant but is tough to assemble, organise and distill, we do the groundwork for clients. The key here is 'informatics'," he explains.

How It All Began

Bhate is a chartered accountant by qualification, and his work in investment banking and angel funding brought him into the domain of life sciences. He founded Ideas2Solutions (i2s), an incubation fund that helped entrepreneurs in the life sciences domain to start businesses with seed funding. His work as an investment banker took him to Hong Kong and he headed the Asia Pacific research for pharma, IT services and Internet companies for W I CARR, a major Asian broking house.

It was during this time that he sensed the business opportunity in bio-informatics. "India was opening up, I was burnt out in investment banking, I got partners to invest and I had a solid business idea. So it all came together. Also, I was hungry." Since Bhate himself did not have the technical expertise his company needed, he brought the technology from the government of Singapore and commercialised it to launch Molecular Connections.

Bhate started his company with three others from a 250-sq ft room in Bangalore and a modest investment of Rs 15 lakh. Today, he has 960 employees. He invested his personal savings and got funding from venture capitalists in 2005. "When I started the office in Bangalore, I doubled as CTO, receptionist, CFO and CMO," he smiles and says.

In the beginning, it was hardsell all the way. "It was difficult to convince companies overseas as they thought Indian companies would not be able to master informatics. I travelled extensively in the US and Europe and faced this question: Is this doable in India?"

India was not recognised for life sciences informatics back then, and large pharma companies were restructuring. Also, talent was difficult to hire. "We presented some of our work at a major conference in the US and that's how we bagged our first client, a start-up company from California," reminisces Bhate, who adds that the next step was hiring a top quality team largely comprising people working overseas.

"India was opening up and we wanted to do cutting-edge science. So scientists overseas sensed an opportunity. Besides, we allowed them to publish their work, which is generally not permitted by bigger companies. This motivated the scientists," reveals Bhate.

Even though Molecular Connections was making headway, the worst was yet to come. Launching in 2001 was bad timing as the global markets were on a downturn. "It was a long-gestation business and we underestimated our sales cycle," shares Bhate. Then his worst nightmare came true, when his company ran out of cash in the second year of business as the company had not yet raised capital through funding.

"This may sound cliched but we did not get the business model right in the first place. It took us time to figure out the sweet spots in terms of customer needs and the right business model to address them," confesses Bhate.

"The Board gave us three months to get the business customer-funded or close down. As a founder, I decreased my salary to a token of Re 1 per month till the business was cash-positive," he says.

But Bhate received tremendous support from his employees. Dr Jaya Nagarajan, who has been with the company for 10 years, feels, "His scientific acumen and astute ability to generate new ideas in informatics-related spheres sets him apart. He puts 200 per cent into every task to get the desired results."

Just then, Molecular Connections bagged a big order from a German informatics company, which wanted to outsource some of its work. This order turned the tide and pharma companies started realising that companies in India could do high-level informatics work.

The biggest achievement for Bhate was paying back venture capitalists with one of the highest internal rates of return in the industry. The company has registered 22 per cent growth in profits in the last three years. Bhate has also received awards and accolades from the industry and the government for his contribution to the informatics industry.

Speaking from bitter experience, Bhate advises young entrepreneurs to adopt a flexible approach to their business model. "You need to pull up your socks whenever you sense a problem," he says. "Starting from scratch is extremely difficult, which is why so many new firms do not succeed. Nearly every business goes through growing pains and one might be tempted to give up early. Remember, only the successful ones keep pushing"